The Dubious dawn of Couples Therapy

The Dubious Dawn of Couples Therapy

The Dubious Dawn of Couples Therapy 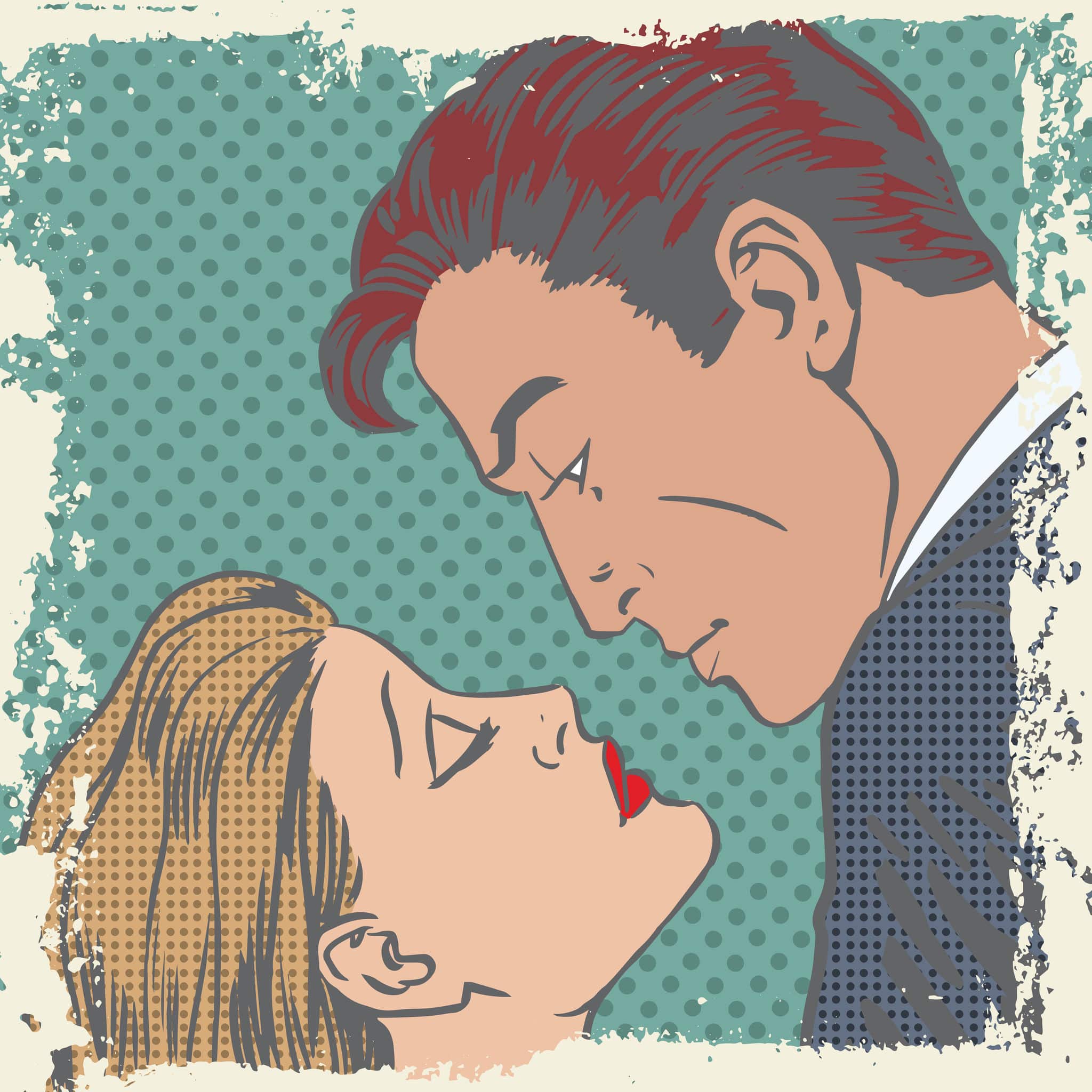 I am sometimes asked why science-based couples therapy is so essential.

Perhaps as an answer to that question, we can take a brief look at the “bad old days.” Before any scientific metrics.

Back when couples therapy was an offshoot of eugenics. This was the dawn of couples therapy in the 1950s. It was a time of monolithic patriarchy, male privilege, and crackpot pseudo-science.

America in the 1950s craved couples therapy. Divorce rates in the U.S. were rising by the end of World War II. The burgeoning middle class was becoming increasingly preoccupied with the quality of marriage and family life.

Increasing incidents of divorce and simmering discontents, which would later erupt into the second wave of feminism, compelled many couples to seek professional “help” to improve their marriages.

The Problem That Was Paul Popenoe

His only formal training was as a horticulturist.  He knew far more about dates than date night.

Like Hitler, he had a fascination with eugenics, and he was a leader in promoting the sterilization of the mentally ill. Popenoe was also an enthusiastic racist.

An elementary knowledge of the history of Africa, or the more recent and much-quoted example of Haiti, is sufficient to prove that the Negro’s own social heritage is at a level far below that of the whites among whom he is living in the United States…. The Negro race is germinally lacking in the higher developments of intelligence.   Paul Popenoe

Popenoe believed that all inferior “waste people” people should be housed on rural farms, and worked as slaves to pay for their upkeep.

Popenoe’s fame grew along with America’s interest in marriage counseling. In the 1950s, Popenoe was everywhere. He appeared for over a decade on Art Linkletter’s TV show, and other early television programs, pandering his racist, moralistic pseudo-science.

Unfortunately, he successfully established one of America’s first marriage counseling centers, The American Institute of Family Relations. The institute operated only a few years past his death in 1979. He also had a regular column, Can this Marriage be Saved? In the Ladies Home Journal.

Marriage as a Career

During the dawn of couples therapy, “marriage counselors” like Popenoe instructed wives that their primary happiness in marriage was found in being a “helpmeet” and support to their husbands and to raise their children. The relative happiness and success of the marriage were her sole responsibility.

“Marriage counselors” of the 1950’s also instructed wives to assist wherever possible in their husbands’ professional aspirations.

The corporate culture of the post-war era held that a wife could make or break her husband’s career.

This notion was foundational to many of the family situation comedies of early television. Corporations of the 1950s tended to hyper-focus on wives. In promoting or hiring executives, companies carefully considered the quality of the candidate’s home life. For example, R.E. Dumas Milner was a prominent mid-century hotelier and car dealer. In a 1950’s article in Good Housekeeping he wrote:

We employers realize how often the wrong wife can break the right man. This doesn’t mean that the wife is necessarily wrong for the man but that she is wrong for the job. On the other hand, more often than is realized the wife is the chief factor in the husband’s success in his career.  –R.E Dumas Milner.

Alcohol, domestic abuse, or chronic affairs. It didn’t matter. A man’s behavior was merely a “window” into the quality of his partner. 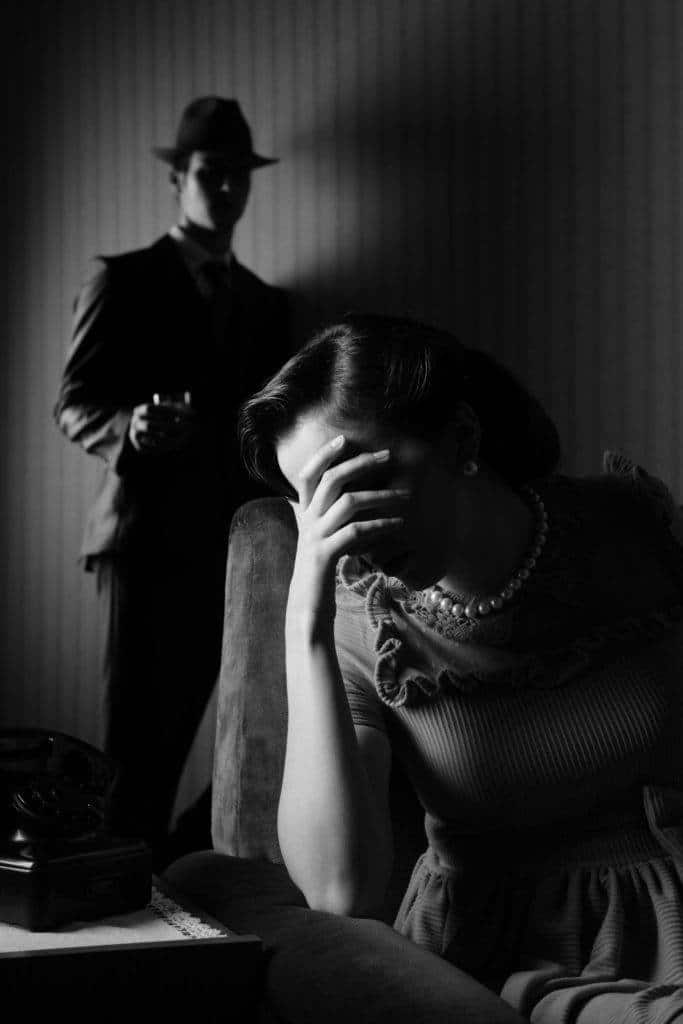 If a husband was violent, abusive, alcoholic, or a chronic philanderer…well, then, what was the wife doing or not doing to make him so unhappy?

Before the advent of science-based couples therapy, “marriage counselors” like Popenoe instructed wives to reflect on how they eroded the quality of their husband’s marital experience.

If a husband strayed, the wife’s job was to create conditions favorable for his return. If you fix your behavior… your husband might return.

Here is what a “marriage counselor” at Popenoe’s American Institute of Family Relations told a woman whose husband had begun an affair after almost 30 years of marriage:

We have found in our experience, that when a husband leaves his home, he may be seeking refuge from an unpleasant environment.

Could it be that your husband feels that he is not understood or appreciated in his own home? What might there be in your relations to him that could make him feel that way?

Could you have stressed your contribution to your marriage in such a manner as to have belittled the part he has played and thus made him uncomfortable in his [own] presence?

No problem in the dawn of couples therapy!

The unfortunate issue could be completely solved if a wife could do a better job helping her husband to relax.  Another 1950’s marriage “expert” Clifford Adams:

We can assure wives whose husbands are prone to violence that following a program of avoiding arguments, indulging their husbands’ whims, helping them relax, and sharing their burdens would “foster harmony” in the home and make them even “happy wives.” –Clifford Adams

Divorcees Anonymous (DA) was an organization that purported to “help” women avoid the shameful pitfall of divorce. It followed the cultural assumptions that the happiness of the husband should be the sole preoccupation of the wife. DA was mainly a form of peer pressure.

A male lawyer founded the organization. Women would coach and provide help to distressed wives in troubled marriages by helping them to accept fuller responsibility for their husband’s discontent and take action to woo him back.

Confused Approaches in the Dawn of Couples Therapy

In the dawn of couples therapy, most couples that attended marriage counseling saw their “therapist” separately. The American Association of Marriage Counselors held that “joint conferences with both partners can be helpful but are difficult and potentially dangerous.” This seems silly and ridiculous today, but such was the state of “expert” advice in the 1950s. 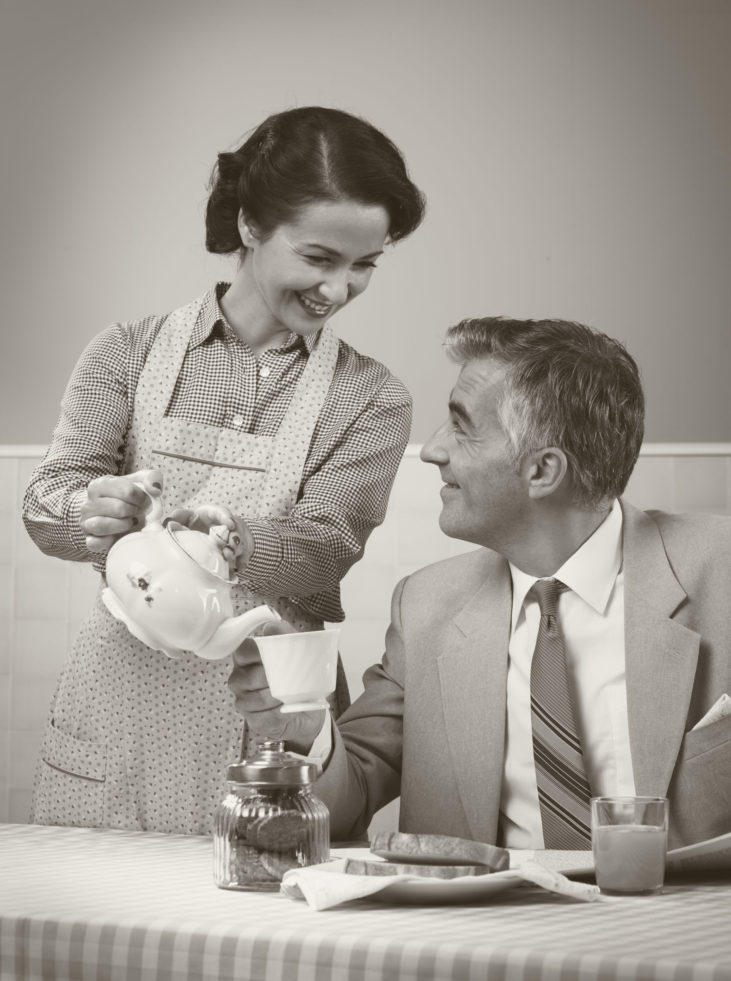 The “career” of being a wife began even before the wedding with attracting and securing a suitable husband.

In the 1950s, the prevailing cultural belief was that women benefitted more from marriage than men (science has now discovered that the exact opposite is true).

Mostly women had to persuade and “sell” themselves as worthy spouses.

Here is some typical 1950’s blather on securing a husband:

It is up to you to earn the proposal — by waging a dignified, common-sense campaign designed to help him see for himself that matrimony rather than bachelorhood is the keystone of a full and happy life.

The above quote is from the Ladies Home Journal four-part series in 1954 about the importance for women to engage in relentless self-improvement in the pursuit of a husband.

In another one of the segments, a single 29-year-old woman wrote about a recent counseling session she had in a “Marriage Readiness Course” She learned that she needed to lower her expectations, improve her appearance and work on her intimacy issues. She later happily reported that she acted on the advice and landed a suitable mate. Good for her… I think…

Modern science confronts cultural bias and is curious and cautiously skeptical about how it informs the conversation.

Thanks to Gottman and other researchers, we have learned that the actual truth of marriage and intimacy is sometimes counter-intuitive and can violate popularly held beliefs.

The dawn of couples therapy was a dark time of ignorance, patriarchy, and unbearable pressure on women to accept full responsibility for the relative health of their marriages. Thanks to evidence-based couples therapy, we now know better.