A Good Marriage is Worth a Fortune 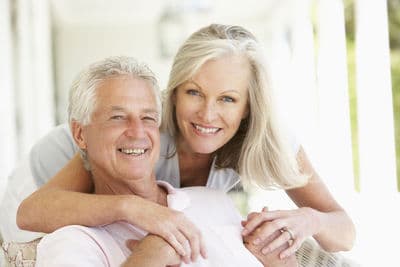 Millionaires stay married because a good marriage is worth a lot MORE than money, but we’ll get to that.

…you’ll have greater wealth than you could ever imagine. Certainly more than if you stayed single.

On the other hand: The reverse is also true:

A Bad Marriage Will Sicken You 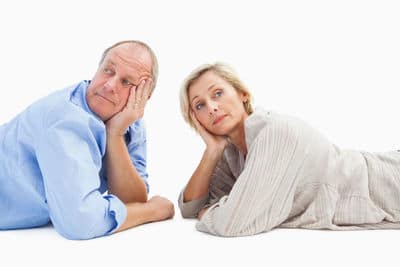 A lousy marriage may leave you broke, resentful, and probably sick to boot, either mentally, spiritually, physically, or all three.

If you’re a driven, ambitious person who isn’t getting along well in your marriage, you probably need to have some objective input.

Millionaires stay married…but you won’t get far married to the wrong person, fighting all the time (badly), or feeling like you are each on a different page.

And you will do poorly by taking these same bad social skills into your next marriage because the chances of your second marriage working out are 30% lower than the first one.

My job is to help people figure out if they married Mr. or Ms. Right then teach them to fight well and dream together well. Millionaires stay married because they prefer it that way.

The couples we work with don’t worry about survival needs. And most of them can hire a handyman to repair something that’s broken. Or clean their houses. Or cook for them. So we aren’t talking here about staying married because you need an extra paycheck or someone to help with the mortgage.

Millionaires stay married because they know that having a ‘helpmate’ means a lot more than a handyman or a cook.

They know that having a spouse means having an intimate friend, a companion, someone to share a life with and talk about things that matter. Someone who wants you to come home at night and misses you when you can’t.

Someone who looks forward to kissing you and getting that rush of affectionate and passionate feeling. Someone you know, for a fact, didn’t marry you for your money, because you probably didn’t have any when you got married. At least according to the comprehensive research of the brilliant psychologist Dr. Thomas Stanley. 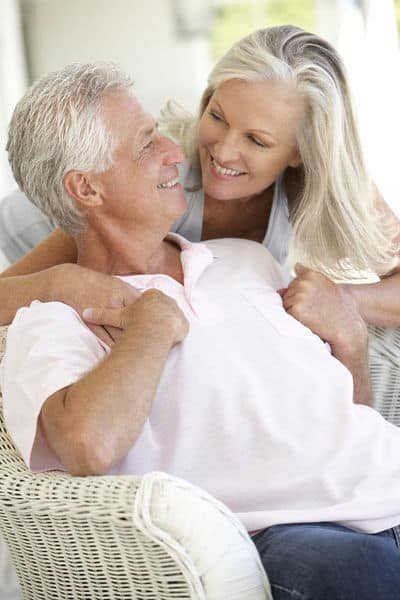 Millionaires Stay Married, but It’s Not About the Money

And if you think that Millionaires stay married because some “gold digger wife” is buying tons of vacations and jewels to make a living with “the old geezer tolerable,” you’re watching too much reality TV.

And they aren’t movie stars, or in some glamorous profession, either. You would never know they were millionaires by meeting them.

They are the “Millionaires Next Door” that you’d never suspect are working because they love it.

It’s who they are.

Not Rich When First Hitched

The average Millionaire was not rich when he (yes, most are men…) married, and he stayed married through an average of three financial setbacks, BEFORE making his first million.

Learned from it, then rebuilt the next business. “Lost their shirts” (or perhaps just their collars this time…) and started over smarter.

And the entire time, their wives were there saying:

“None of that’s essential. You learned from it. Just try again…I believe in you…

Which was remarkably similar to what their parents said to them when they did rather mediocre in college:

Resilience is their Watchword

That’s not every Millionaire’s story, of course. Some of these men had terrible childhoods:

That’s a second profile. And those marriages need a different approach that helps them form a more healing bond.

But what this first group of men had, which was so rare, was not wealth handed to them (most of them didn’t), or an exceptional education (most didn’t, either, and many never went to college…). What they had was a partner who loved and cared for them, whether they were rich or poor. Parents who respected and cared for them, regardless of the grades they got.

Money didn’t matter when they didn’t have any in these marriages, and money didn’t impact them much when they had a lot of it.

It was their relationship that mattered most. 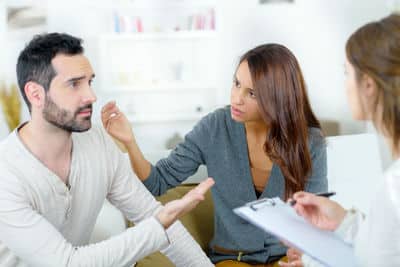 When Millionaires come to me, they are often stuck and are focused on trying to healing what’s broken.

They recognize that starting over with another person is not only expensive economically, but extremely expensive emotionally.

Their partners are their “compasses.” Their “directional,” even if their spouse knows relatively little about the technicalities of their businesses or professions.

And they know full well that you can’t buy love.

And you can’t. You really can’t.

Their marriages are much more valuable than money, because they’ve lost money and they’ve made money, but they’ve always kept their spouses. Millionaires stay married because they have a spouse who’s more precious than gold.

I love working with my millionaires because they have two consistent qualities that I admire: Integrity and a willingness to engage in Hard Work.

Not everyone displays a ton of integrity when they first show up, don’t get me wrong. Sometimes they’ve lost their way. Sometimes it is an affair, or they’ve become bullies. Sometimes they are depressed. Sometimes it’s a child that prevents the two of them from getting on the same page and working together.

But I can pull on that integrity because I know it’s in there for most of the couples I treat.

I can talk a language of integrity (and sometimes that’s pretty tough to hear…) and they can listen.

And Millionaires stay married because they’ve known hard times and don’t shy away from hard work. 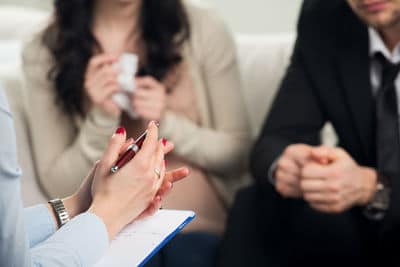 Smart, economically successful people respect the truth if you have the guts to tell them.

If you’re not used to dealing with Millionaires, you’ll hear their “roar,” and perhaps become frightened by it.

The “All-Purpose Therapist” might even be afraid to “lose” wealthy clients if they challenge these influential people.

Not Afraid to Lose You Either

That is so, so wrong. It’s the kiss of death with these clients. It’s the exact wrong way to go.

So these couples go from therapist to therapist, never hearing what they need to understand to start changing the way they relate. In a troubled marriage on the verge of divorce, sometimes it’s as candid as:

“You have to realize that for this marriage to start working again you’re going to have to shrink that ego of yours. It got you where you are now…as successful as you are. It was useful. It made you rich. But it’s not going to work in this marriage anymore, if it ever really did.

Your wife won’t be bullied by: “Because I said so…” And she’s tired of being ignored. I know you love your wife. I know you want very much to stay married. And I can help you to do that. But you have to hear me when I say this:

‘There is a part of you that is going to reject everything I’m about to tell you. If you listen to that part, you’ll fail at making your marriage as successful as your financial life…” 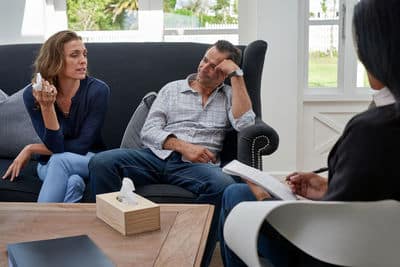 Then I tell them what I have to say that’s difficult to hear.

It’s never the same message. But it is usually a powerful message.

I work well with Millionaires because I’m not intimidated by wealth. Or power. And I don’t need their business.

I appreciate their business, don’t get me wrong.

I have the best clients in the world, and I’m honored to work with them. But I don’t need their business.

Sharing Your Hard-Earned Future Together.

Instead, I’m always on the side of any marriage that has a reasonable possibility of thriving.

Even if they can’t see it.

And often they can’t see the upside. They can’t imagine that there is any hope.

They can’t see the positives because the nature of marital unhappiness, always makes the outcome look grim.

What do I see in problematic Millionaire marriages?

And sometimes it’s a power struggle to figure out how to cut back, cut down, accept that you’ve fought a great fight, and now it’s time to get your enjoyment from other things.

Commonly called “retirement,” but most of these folks never REALLY retire. They often just do something else. And that something else can sometimes be a tough nut to discover. 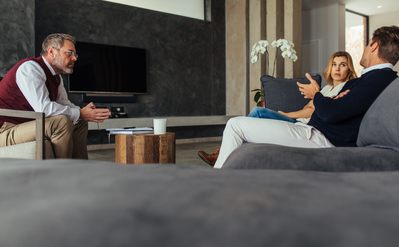 And they’ve got the credentials to prove it.

Because my clients demand the very best when it comes to protecting something they treasure.

That’s IF they know what to look for, and in couples therapy, this can be hard to sort out.

You can watch this video about how I didn’t know what to look for EITHER when my first marriage fell apart…Maybe they went to a local therapist and felt like they got nowhere. And blamed their marriage. That’s a typical story we hear.

Neither can a therapist who works individually with Millionaires. You need to find someone with an absolute passion for couples therapy. A fanatic who focuses on an incredibly single-minded way of honing and refining their skills in Couples Therapy.

I look at a lot of resumes each week, and I can tell you, that’s a rare find.

I could go into more detail but just know this:

Because your insurance won’t pay for it, your average “All-Purpose Therapist” hasn’t a clue how to work effectively with couples.

At best, even in a Marriage and Family Therapy Program, they’ve taken only a single course.

In contrast, we expect each seasoned couples therapist we hire to have expertise in at least two methods of working with couples, one of which must be evidence-based. 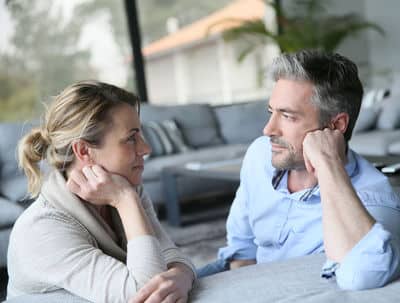 I search the Globe and have spent a lot of money finding these gems. They’re masters. I’m so proud of each and every one of them.

They stand out because they’ve bucked the odds and trained in couples therapy for one reason: They love working with couples.

Because when you love something, you work at it. You conquer the odds.

You excel above your competitors. You don’t think like the crowd or accept ‘truisms.’

(But you know that.)

You find a way of doing it when the entire field says there’s nothing in it for you. (Like insurance money, because insurance companies don’t pay for couples therapy…)

If You Need to Work on Your Marriage Hire the Couples Therapists Chosen by Millionaires.

We’d love to help you because… millionaires stay married.

You don’t have to be a millionaire to see us, but if you do, you’ll be on your way to the wealth of a healthy marriage.

(We also specialize in couples with “neuro-atypical pairing” such as ADHD, Asperger’s, and the like).

Previous Post What to Look for in a Marriage Counselor…5 Essential Qualities Next Post Marriage After Baby: “Help! The stork stole my marriage!”