Why is Repair a Bedrock Skill in Couples Therapy?

You may not realize this, but we’re not so good as a species at this new-fangled intimacy stuff. The fact is, most of us don’t know how to repair with our partners.

Did you know that, on average, both spouses in a committed relationship are only emotionally available to each other less than 10% of the time?… ( well…9% to be exact).

In his book, The Science of Trust, Dr. John Gottman explains that because of this deficit, 91% of our time spent together as a couple is actually spent as a foursome…because when you’re not emotionally available with your real partner, you’re probably in deep communion with the partner in your head.

That’s why I want to talk to you about one of the most powerful interventions in science-based couples therapy…the Gottman Repair Checklist.

The difference between good mothers and bad mothers, is not the commission of errors, but what they do with them. Donald Winnicott.

Parents (and spouses) both contribute to an emotional field…and that field directly impacts the quality of the attachment bond. A resilient Secure Attachment style is directly related to the degree in which a conducive environment for secure attachment was reliably provided for the child…or the adult partner they eventually became for that matter.

The Gottman Repair Checklist…Accepts Existential Failure as a Given…

The difference between happy and unhappy couples is the skill of repair. Because failure and disconnection are baked in the cake.

Some therapists explain this by reassuring us that “failure is not the problem.”

But that’s clearly not the case.

If you failed at being emotionally available 100% of the time you wouldn’t have much of a relationship.

But what is true is that failure is not as big a deal as you might think. Mother nature is very forgiving as we’re learning how to emotionally attach.

The Importance of Friendship 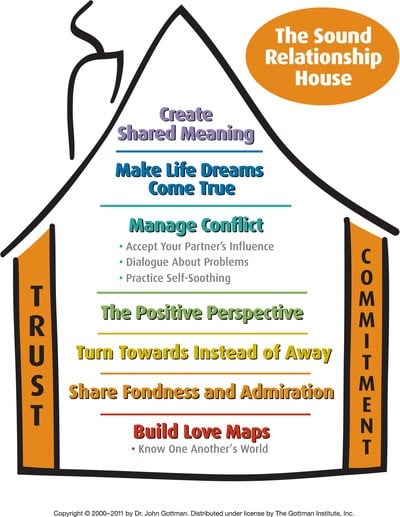 In Gottman’s pictograph of the Sound Relationship House, the first 3 levels are called the Friendship System.

In order to effectively make and receive repairs, a couple may first need to spend some time doing the following:

Turn Towards Instead Of Away

This is another part of the Friendship System that has a massive impact on making repair attempts more effective. How effective? When Gottman was researching newlyweds couples that were still together at the critical 6-year mark turned towards one another 86% of the time. Newlyweds that had subsequently divorced turned toward one another only 33% of the time. Turning Towards your spouse is a powerful way to improve your repair attempts.

The Principle of “Good Enough”

“Good enough” means having suitable resources to satisfy the need at hand. It first emerged as a cultural trope in 1953. In that year, the British pediatrician, D. W. Winnicott, famously described the “Good Enough Mother.”

The essential idea is not that there is a baseline of emotional engagement which is “good enough.” The key idea is rather that the very lack of maternal perfection introduces a sorely needed reality principle, and helps the infant to develop both resilience and a healthy, secure attachment.

The very deficit that renders a mother only “good enough” introduces an infant to the notion that they won’t always have a perfect outcome, and that dose of reality is both authentic and healthy. In other words, good enough is part of the natural order of things and is perfect. 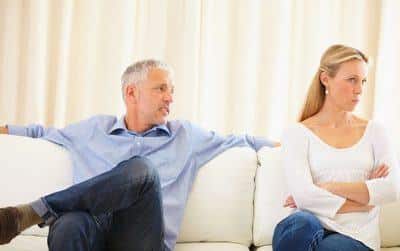 Unpacking the Gottman Repair Checklist… and a “Good Enough” Repair

Each spouse is given the Gottman Repair Checklist handout.

The Repair Checklist focuses on the 6 different categories of partner interactions; I feel, Sorry, Getting to Yes, I need to Calm Down,  Stop Action, and I Appreciate.

We ask each spouse to imagine that they are in a difficult conversation with their partner, and their partner just noticed that they were not pleased with what they just said.

We ask the couple…look at each phrase on this list, one at a time. Imagine that your spouse just said that particular phrase that to you in an attempt to repair with you, and calm things down. Do you think it would work?

If they do think it would work, we ask them to put a checkmark next to it. It’s also important that each spouse put their name at the top of the checklist.

Both spouses review each of the phrases and check the phrases that, if their partner said it to them, would probably calm them down. Le’s look at each category 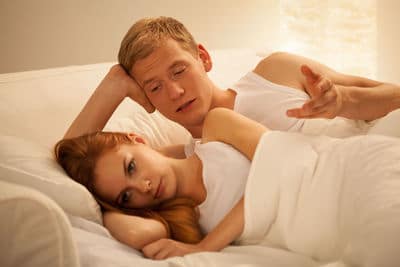 Your partner isn’t a mind reader. They won’t necessarily know what you’re feeling unless you tell them. What words work best when sharing difficult feelings with your partner?

Saying you’re sorry is a basic repair we learn as children. It’s still just as important now. How does your partner want to hear you apologize?

Focus on what you can agree on. These phrases will move toward a “yes” or a “good enough” compromise. What does your partner need to hear that will help them collaborate more quickly?

I Need To Calm Down

In science-based couples therapy, these phrases help our clients learn how to regulate and co-regulate their nervous systems. What is the most powerful thing you can say to your spouse to help them calm down?

Sometimes the most important thing to do is stop the conversation immediately and de-escalate. What’s the best thing to say o your partner to accomplish that?

Appreciation not only builds the Friendship System, but it also is a powerful de-escalator. How does your partner want to be appreciated? What does your spouse most want to e appreciated for?

We then ask the spouses to exchange sheets. Then I say:

You now have in front of you a list of phrases your partner thinks might tend to calm them down if you used them to make a repair attempt. Let’s hear you actually say it and see.”

I then ask the spouse who is speaking to read each repair attempt with an appropriate degree of emotion. The listener “checks-in” to their body and gives a thumbs up or down with each phrase. We are only focused on the phrases that were checked in advance.

What We’ve Learned About the Gottman Repair Checklist

I’ve done the Gottman Repair Checklist many times and I’ve noticed some typical reactions to hearing their partner say the words that they thought might calm them down:

We have a tendency to view our own emotional reactions as universal, when in fact, they are often idiosyncratic.

The Gottman Repair Checklist requires us to focus on our partner, and compile a body of knowledge about their unique emotional responses.

We get a lot of feedback from our clients about how the Repair Checklist has completely transformed how they manage conflict. Making effective repair attempts is an essential skill…may we teach it to you as well?

Learn to Repair With Your Partner

10 Solid Tips on How to Prepare for Couples Counseling