The Married Man Flirting at Work

The Married Man Flirting at Work

Researchers seem to be utterly fascinated by the married man flirting, and the phenomena of flirting in general. We habitually tend to think of flirting behaviors as synonymous with the expression of sexual interest (Greer & Buss, 1994; Jesser, 1978; Perper, 1985; Simpson et al., 1993). 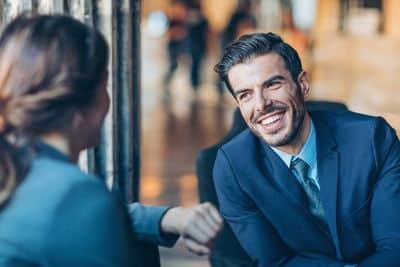 We’ve been researching the married man flirting for quite a long time. Abrahams (1994) believed that sexual intent underlies the decision to flirt or not.

Research by Messman, Canary, & Hause, (2000) suggested that the decision not to flirt with a person is highly correlated with a lack of attraction.

Many researchers seem pretty sure that flirting is a pretty reliable indication of attraction and sexual interest, if not intent (McCormick & Jones, 1989; Simpson et al., 1993).

5 Reasons Other than Sex

On the other hand, a married man flirting is not always looking for sex (Guerrero, Andersen, & Afifi, 2001).

A number of recent studies suggest that there may be no less than 5 reasons other than sex for a married man to flirt (Lee & Guerrero, 2001) and (Yarab, Allgeier, & Sensibaugh, 1999). I believe that a husband flirting at work is a more complicated context than one who tends to flirt in any and all social situations.

The fact that your husband is a flirt at work may not necessarily be an infallible indication that he is unfaithful.

Research by Downey and Damhave (1991) suggested that these men may be looking to intensify a relationship for non-sexual reasons.

Because the motivations for his flirting may be complex, context is everything.

Why Do Married Men Flirt?

Couples therapists have different takes on a married man flirting.

Some therapists feel that self-esteem is a primary motivation, and flirting may have a relational dimension. They also report that some married men flirt to heighten their desirability to their partner.

It’s a way of directly saying “please don’t take me for granted…other women find me attractive.” These therapists suggest that there may be a bit of normal marital sadism in being openly seen as desirable. They suggest that sometimes the only relationship he is seeking to intensify is with his wife.

They also argue that men want to be desired as much as women do, and we forget that fact at our own clinical peril. Not every couples therapist agrees with this.

Many therapists believe that relational dissatisfaction is why a married man is flirting in the first place. I’m not sure that dismissing this complex and somewhat contradictory research is clinically wise. The married man flirting can be a complicated animal.

In couples therapy, when I work with a married man flirting I tend to focus on context and self-esteem.

A married man who flirts on a regular basis is a Generative Conversation waiting to happen. His wife wants to understand him. What does his behavior mean? How does he feel about himself? Does he ever consider the unintended consequences of flirting at work?

Excuses aside, a married man flirting is an invitation to explore possible perceived deficits in the marriage… or in his self-image.

Does He Do It Just to Fit In?

Sometimes flirting is a function of power imbalances and permissive work environments. Perhaps a married man is flirting to keep pace with a permissive and an inappropriate peer group.

I’ve seen permissive environments at work lower standards and encourage flirting as a social lubricant between men and women sometimes at opposite ends of the power continuum.

Recently I worked with a physician and his wife. He was a classic “nice guy” who found himself working in a raunchy and permissive environment.

Nurses bantered inappropriately and used suggestive eye contact and provocative body language with the happily married doctors as a way to assert their power and let off some steam.

I worked with him to suggest that as a powerful figure in the hospital, he had the option of setting boundaries and toning down the sexual banter.

The main problem with a married man flirting is the unmitigated perception that he is open to seeking sexual contact outside of marriage. While it’s hard to deny that flirting has a sexual component, I also notice the aspirational component as well.

What is he seeking to achieve? Sex? Fun? Not standing out as a prude from his raunchier peers? Is he merely being playful? political? Or is he simply on the prowl for a workplace affair?

The degree to which a husband is willing to be curious and open about his chronic flirting is important.

There is an intent behind a flirtatious married man. What is it? A skilled couples therapist will invite a curiosity that is not reflexively judgemental.

Context and aspiration are key ideas for me. I want his spouse to be more curious than furious. Because there may be more here than meets the eye.

On the other hand, flirtation is a slippery slope.  It is the gateway behavior to infidelity.

Most companies are utterly clueless about how to have a family-friendly workplace culture. I encourage the married man flirting at work to take a step back and ask “why am doing this?”

When I Said that Researchers Love the Topic of Flirting… I Wasn’t Kidding! :