Money Problems in a Marriage

The way you handle money problems in a marriage is the number 1 predictor of divorce according to a recent study. In addition to this new scientific research, a recent informal poll by “Money Magazine” suggested that couples fight about money twice as much as they fight about sex. And conflicts over cash can even show up in pre-marital counseling as well. Here are 5 money problems in a marriage that can strain you to the breaking point:

Whose Money Pays for What Bills? 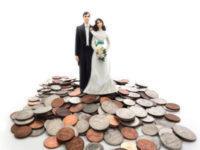 We no longer live in households with a rigid division of labor. Often in two-career households, values can clash around saving, spending and investing.

Some couples decide to split household bills right down the middle or seek agreement through a “who pays for what” strategy.

It sounds like a reasonable plan, but the process often creates lingering resentment when large-ticket individual purchases are made.

Separate but “equal” financial lifestyles can be problematic.

Couples often report that they feel blindsided by separate finances, and it becomes more difficult to develop a sense of “we-ness” when there are two wallets.

You’re two separate people with different thoughts, needs, and aspirations. Have a meta-conversation about the meaning of money, and see if you can reach some degree of alignment over your most important shared goals and dreams. Otherwise, your differences may lead to frequent clashes over conflicting values.

Money Problems in a Marriage are Often Due to Power Plays

Power plays are often predictors of divorce. They often happen when spouses have a large inequity in their earning power. It may be a temporary bout of unemployment, or a more entrenched, ongoing, career-based income disparity.

Differences in socio-economic class can sometimes be a factor. Money problems in marriage arise from imbalances in power, decision-making, and transparency.

For example, recently I spoke to a woman who was seeking couples therapy because she became extremely annoyed when her husband sold his company for 100 million dollars and proceeded to engage in what she felt was “frivolous spending.”

When sudden money happens, the spouse responsible for the sudden cash often expects to dictate the family’s spending priorities. When teamwork goes out of the window, nasty arguments about money usually follow.

A recent study also indicated that infidelity was correlated with an extreme disparity in earning power. This research was independent of gender or who was earning more. Income and resource disparities are inherently de-stabilizing for couples.

Kids, Cash, and Life Lessons…Huge Money Problems in a Marriage 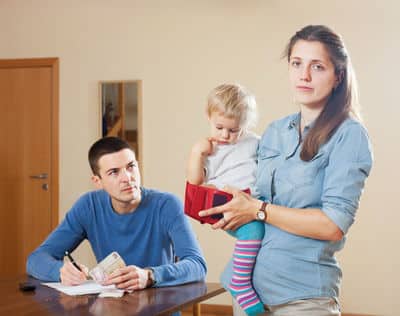 Research tells us that the decision to have children should be settled before getting married.

The average child costs approximately $300,000 to nurture to the threshold of adulthood.

In addition, value clashes around cash and kids can be a constant source of conflict, and a predictor of divorce.

Arguments about clothes, private school, sports, college as well as many other discretionary expenses are common.

Even when, how (and if) they leave the nest can be an aggravating source of conflict.

Because there are so many possible flashpoints around kids, money problems in marriage frequently concern children and the constellation of values both parents endeavor to pass on.

We work a lot with entrepreneurs, and sometimes couples can get into perilously risky situations as they chase their dreams.

When a calculated risk goes badly, the more conservative spouse may feel constantly anxious and fearful. But if the risk was taken without their active involvement in the decision-making process, the results can be catastrophic for the marriage.

This creates a stressful money problem in a marriage that often has no discernable solution. And when transparency and fair-play are not present, these resentments can fester into constant marital conflict.

Research on Money Problems in a Marriage 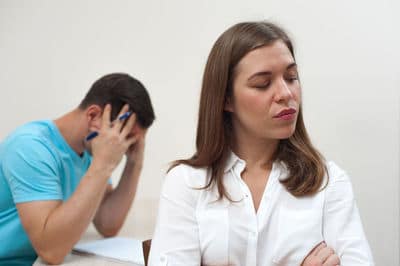 A recent survey of over 4,500 couples disclosed that when there are money problems in a marriage, couples tend to use the harshest and most contemptuous language. And contempt is a known predictor of divorce.

The arguments are also more intense and persist much longer than any other kind of argument.

Arguments about money also take longer than any other kind of argument to recover from.

The more arguments about money couples have, the less empathy they have for each other’s point of view.

The less empathy and understanding they have for their spouses’ perspective, the less satisfied they are with the spouse.

Dr. Sonya Britt-Lutter, the co-author of the study had this to say about money problems in a marriage:

“Arguments about money is by far the top predictor of divorce. It’s not children, in-laws or anything else. It’s money — for both men and women.”

Dr. Britt-Lutter explained the design of the study and the results:

“In the study, we controlled for income, debt and net worth. Results revealed it didn’t matter how much you made or how much you were worth. Arguments about money are the top predictor of divorce because it happens at all levels.”

The researchers found that when couples argue about money early in the relationship it did not bode well for their future marital security.

Dr. Britt-Lutter had this to say about the persistence of money problems in a marriage:

“You can measure people’s money arguments when they are very first married. It doesn’t matter how long ago it was, but when they were first together and already arguing about money, there is a good chance they are going to have poor relationship satisfaction.”

People who are stressed about money tend to avoid discussing the issue, which makes the topic of money a constant source of conflict.

Dr. Britt-Lutter said if you fail to plan, you’re planning to fail, but stress is the key factor. Other research also backs her up. Living in constant financial stress can lower your IQ by 15 points or more:

“…people who are stressed are very short-term focused. They don’t plan for the future. If you can reduce stress, you can increase planning. If the money is not being treated fairly in the household, then the relationship satisfaction is going to be lower.”

Money Problems in Marriage…the Bottom Line For Love or Money

Communication is the key to most marital financial challenges. And poor communication is a well-known predictor of divorce as well. Being open, direct, and transparent about financial obligations can help you both decide how to deal with it as a united front.

Have a meta-discussion about the important values in life. Decide, don’t slide in major decisions, such as having children.

Have a frank discussion about power and decision-making. The power play issues can get ugly fast, and are a predictor of divorce. Few things build resentment more quickly than feeling marginalized, powerless and kept in the dark by your spouse.

If you’ve got the cash, you need to be sensitive about how you throw your weight around. And if you’re not the spouse with the spending power, expect to feel occasional stress and tension.

Research tells us that the later in life that you marry, the more money problems you will have. Particularly with issues of power and decision-making.

I’ve seen situations where the power difference was soothed by a political decision. Sometimes the higher-earning spouse will delegate all of the important spending decisions to their lower-earning, or non-earning partners. This is a way of bestowing respect and assuring them a role in decision making.

It takes a sense of security and maturity to give up power, but if have an abundance of trust in your partner, it just might work for you. Sharing power fosters a sense of “we-ness.”

Talk about your values, and use Generative Conversations to make important decisions as a team.

Don’t Let Squabbles About Money Muck Up Your Marriage…

What to Do When the Honeymoon Phase Wears Off